Upper Arlington, Ohio, is a city in Franklin County. Real estate developers King and Ben Thompson bought farmland here in 1913, then the land was incorporated as a village five years later. It was named for its southern neighbor Arlington, which is now called Marble Cliff. Today Upper Arlington is home to approximately 35,000 citizens.

Upper Arlington residents enjoy living in their community because of its suburban, family-friendly atmosphere. It also borders Columbus, so the larger city and all of its amenities are only a stone’s throw away. One of the most distinctive features here is its public art. You’ll find intriguing sculptures of people and objects throughout its parks. For more artworks, you can visit the Concourse Gallery in Columbus. You can run some of your errands at Kingsdale Shopping Center, with retailers that include Barnes and Noble, Walgreens, Panera Bread, and more. Consider becoming a member of the Swim and Racquet Club. In addition to pools and tennis courts, the club offers a snack bar, a clubhouse, and annual social events. This town has twenty-three parks that cover about 180 acres of land. A popular park in the area is Griggs Reservoir Park, a park that lies next to the Scioto River. There, you can walk on its trails, play disc golf, go boating, or explore its nature preserves. As a family-friendly community, Upper Arlington has twelve schools: one public early childhood school, five public elementary schools, two public middle schools, one public high school, and three private schools. With so many fabulous features, Upper Arlington has much to offer prospective homebuyers.

Seventy-five percent of Upper Arlington real estate properties consist of single-family dwellings. Other kinds of Upper Arlington homes include apartments, townhomes, and mobile homes. The residences here have an average of three bedrooms, and most of them were constructed during the years 1940-1969, so they exude a cozy, well-established feel. Think about moving to Upper Arlington. This town is artsy, family-centered, and has lush parks and green spaces.

If you have questions about homes for sale in Upper Arlington, Ohio, don’t hesitate to contact us.

Welcome to this updated 2.5 story home located on a quiet street South of Lane. This amazing open concept home has been updated throughout. 4 bedrooms, 2.5 baths. Large L...

This Exceptional Home is in pristine condition and offers an ideal Floor plan and has been completely renovated including a Fabulous Kitchen fully equipped with Stainless...

You will love the Old World Charm in this All in Wood Master Craftsman, custom built home on a scenic ravine lot surrounded by creek & mature trees. Only the finest of qu...

This sprawling, 3-level home has had significant renovations and upgrades made since this family built and moved in in 1959. WOW! Improvements have occurred within the ...

Courtesy of HER, Realtors
Laura A Stuckey

Listing Courtesy of : Laura A Stuckey ---- HER, Realtors

This turn-key, UA Ranch home was completely renovated by current owners when they purchased in 2016. Featuring an open concept and an updated kitchen w/ custom cabinets,...

Welcome home! The extended first floor gives ample space for entertaining in the living room, cooking in the kitchen, hosting a large meal in the dining area, and two con...

Courtesy of RE/MAX Metro Plus
Kacey A Wright

Listing Courtesy of : Kacey A Wright ---- RE/MAX Metro Plus

No better location in Upper Arlington to own a condo! Watch the 4th of July fireworks from your front yard, walk to the UA Arts Festival, Northam Park, area restaurants, ...

This second floor unit is fully renovated, spacious and ready for occupancy. The renovation has transformed the unit into a ''new'' living space in an existing building w... 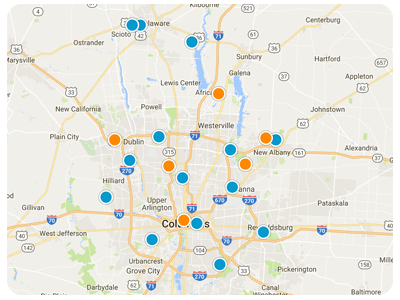